Greenwood county nonprofits can seek funding solutions for future operational and programming needs through endowed funds with GCCF. Supporters are invited to contribute to their funds via our convenient contribution portal.

This fund was begun utilizing the bequest gift of a long-time friend of the Arts Center Greenwood. The cultural hub of Greenwood County, and one third of Greenwood’s “Emerald Triangle” arts district, the Arts Center is housed in Greenwood’s former Federal Building, which once housed the U.S. Post Office as well as many federal government offices. The 3,000 square-foot gallery hosts local and regional art exhibits throughout the year, and the Mays Reception Hall is available as a unique venue for events. The Arts Council of Greenwood County plays a key role in the growth and development of existing artistic groups and encouraging new ones. A number of area artists and arts organizations maintain studios in the building in addition to classrooms, conference and meeting rooms, office space for the Arts Council of Greenwood County, Self Family Foundation and the Greenwood Regional Tourism and Visitors Bureau.

Arts Council activities also include Art in the Afternoon, Art Adventure Camp, the Gallery Holiday Sale, Fall for the Arts, special concerts, gallery exhibits by local artists and the development of cultural facilities. Each year the distribution from this Fund will be used to support operations and fund special projects and events.

Make a Contribution Online to The Arts Center Endowment

Click here to donate online. Scroll down on the Contribute page, check the box, “I would like to designate this donation to a specific fund,” and select C) Arts Center Endowment from the drop-down list. 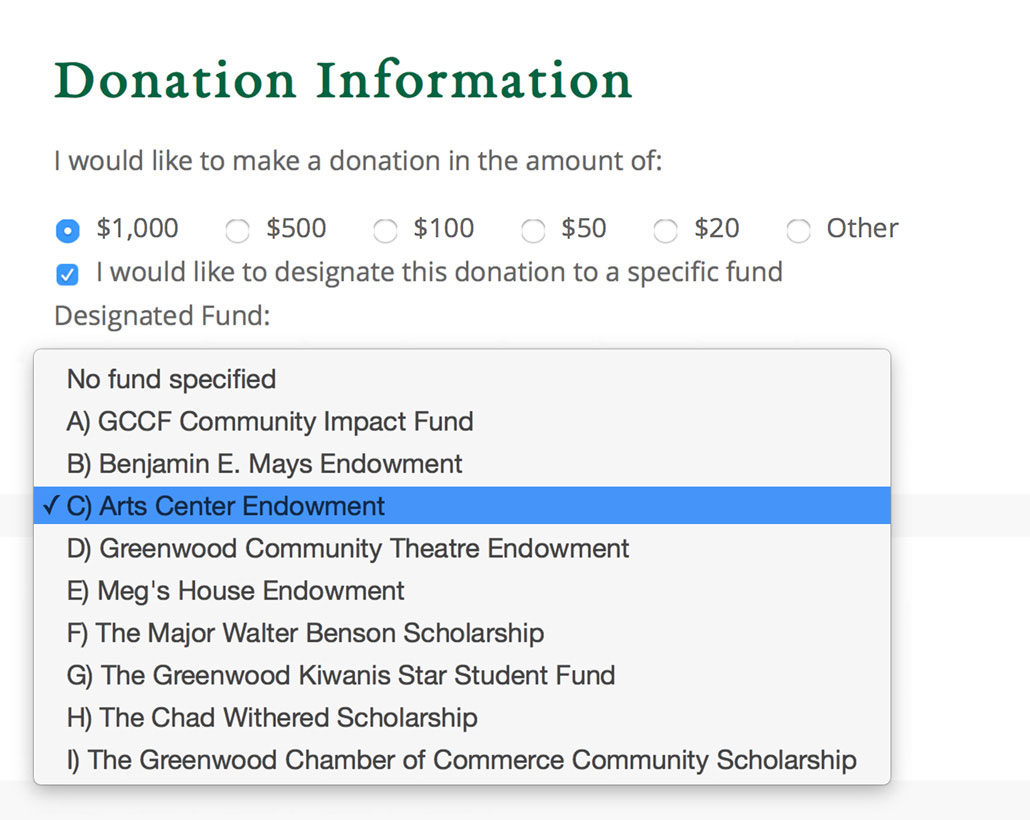 This fund was formed in 2015 when the theatre’s Board of Directors led a campaign among loyal donors who want to ensure that the Greenwood Community Theatre (GCT) continues to offer quality programming for generations to come.

Greenwood Community Theatre officially began in 1954 with its first production, “Dear Ruth.” Originally named the Greenwood Little Theater, it has a long history of outstanding programming and cultural offerings. Through those many years one aspect has remained intact: a focus on creating theater “for the community and by the community.”

GCT’s present home is 110 Main Street, built in 1934 as the site of the State (movie) Theatre. The floor in the current lobby contains the original terrazzo tile. On close inspection you can see the indentions in the floor where the original doors were in place. You will also notice an outline on the exterior floor where the original box office jutted out. Patrons paid for their ticket on the outside of The Theatre before entering.

In 1978, GCT (then called the Greenwood Little Theatre….the spelling of Theater was officially changed to Theatre in 1962) was housed at the Village Theatre on Kirksey Drive in the Matthews Mill Community, and the Board was looking for a new home. The old State Theatre building had fallen into disrepair and The Board, with then-Artistic Director Donald McKellar, convinced the owners to sell the building and the rest is history. GCT has been housed at 110 Main ever since.

GCT aspires to enrich the community by creating and fostering professionalism and diversity in all its theatrical endeavors and experiences.

Contributors to this fund share the belief that theatre is a wonderful place for families to work together or to develop a new “theatre family.” GCT believes that inclusiveness and the nurturing of everyone’s creative talents and gifts is critical to a true sense of community.

Make a Contribution Online to The Greenwood Community Theatre Endowment

Click here to donate online. Scroll down on the Contribute page, check the box, “I would like to designate this donation to a specific fund,” and select D) Greenwood Community Theatre Endowment from the drop-down list. Note: The GCT Board of Directors recommends a minimum endowment contribution of $500. 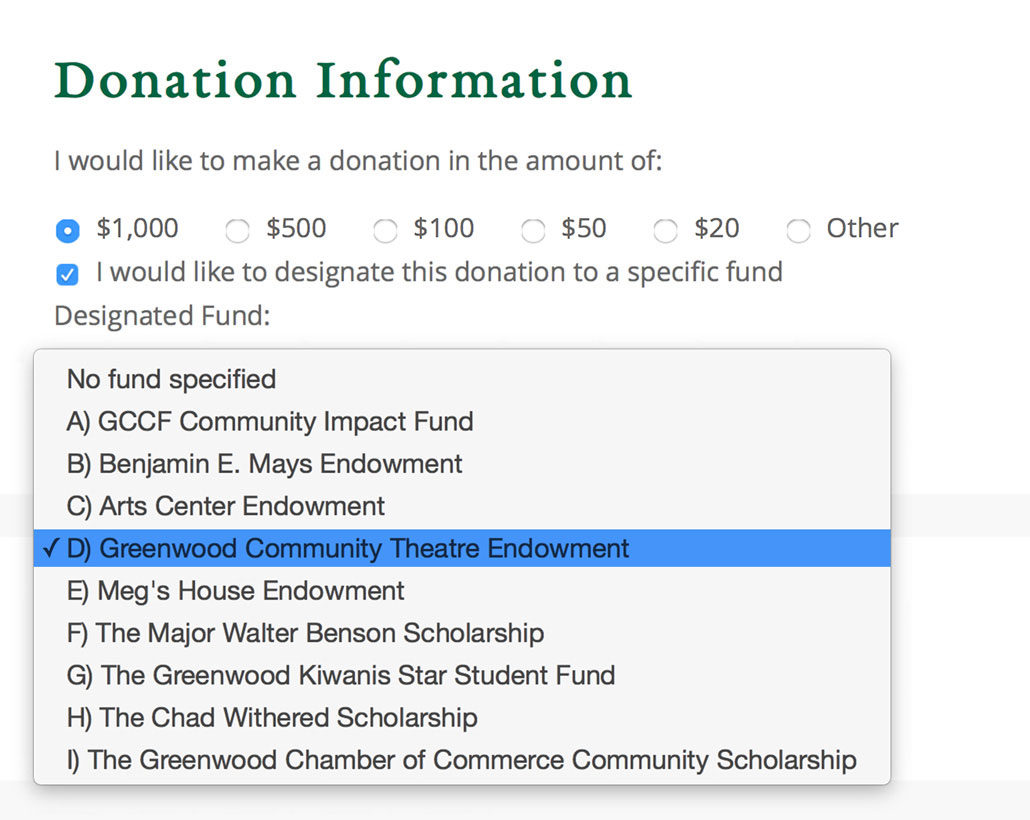 This fund was created as a permanent repository for individuals who wish to ensure the work of this organization goes on continually, moving battered women to a place of shelter, security, strength and independence.

First operated as the Salvation Army Shelter for Abused Women, Meg’s House was later chartered in January, 1990 as The Greenwood Shelter for Abused women under Section 501(c)(3) of the Internal Revenue Code. Deriving its name from the initials of the three counties it serves (McCormick, Edgefield, and Greenwood form the acronym MEG), Meg’s House is incorporated by the State of South Carolina as a not-for-profit organization whose sole purpose is to provide safe emergency shelter and supportive services for victims of domestic violence.

Since its beginning, over 8,600 clients have received services provided by Meg’s House including emergency shelter, assistance with relocation and transitional housing, information and referrals, court advocacy, support groups, and education.

The staff at Meg’s House prides themselves in helping people help themselves lead happy, healthy lives.

Make a Contribution Online to The Meg’s House Endowment

Click here to donate online. Scroll down on the Contribute page, check the box, “I would like to designate this donation to a specific fund,” and select E) Meg’s House Endowment from the drop-down list. 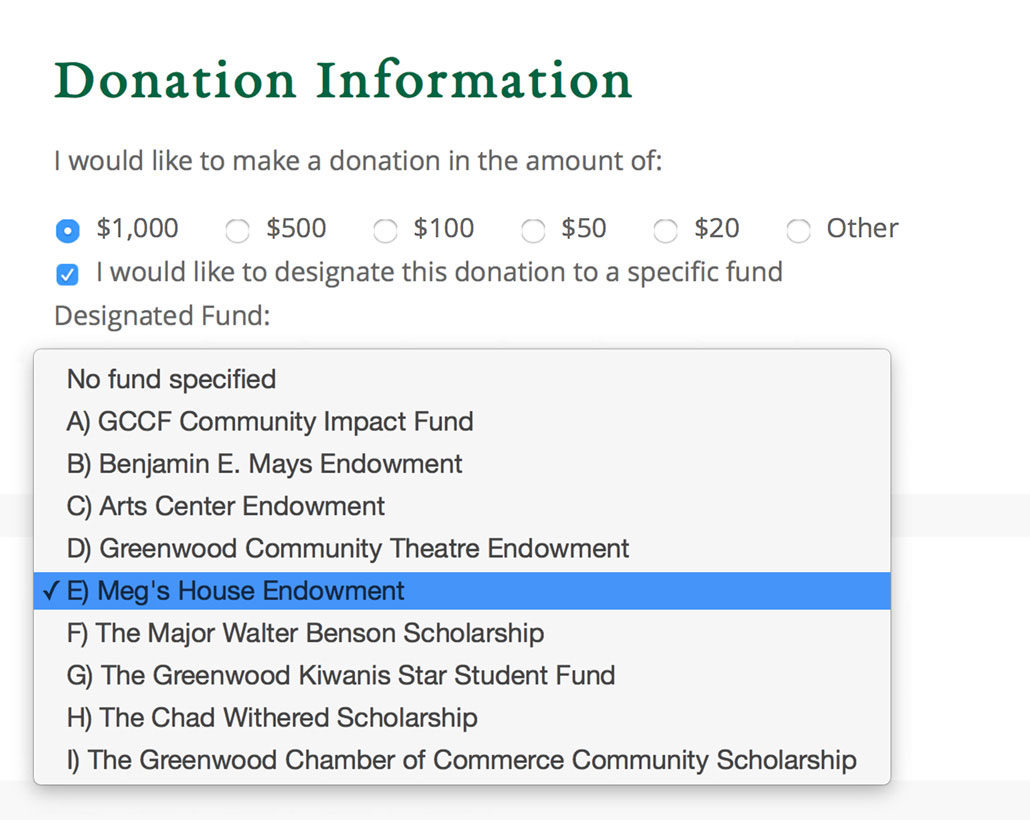 Formed in 1996 by members of the Rotary Club of Greenwood, the Greenwood Rotary Club Foundation was created to be a supporting organization of the Club, to support and benefit its charitable purposes. The original focus of the Foundation’s charitable mission was children’s welfare, but going forward it will fully support the grants program of the Club by providing annual funding from the endowment.

The primary source of funding for the Foundation has been the “John Welborn Challenge,” named for a distinguished Club member who requested that all members, at the first meeting after their birthdays, make contributions to the Foundation equal to or greater than their ages.

The Rotary Club of Greenwood annually grants thousands of dollars to nonprofit organizations in Greenwood County that work to improve the quality of life in our community.

Click here to donate online. Scroll down on the Contribute page, check the box, “I would like to designate this donation to a specific fund,” and select K) “John Welborn Challenge” The Rotary Club of Greenwood Foundation Endowment from the drop-down list. 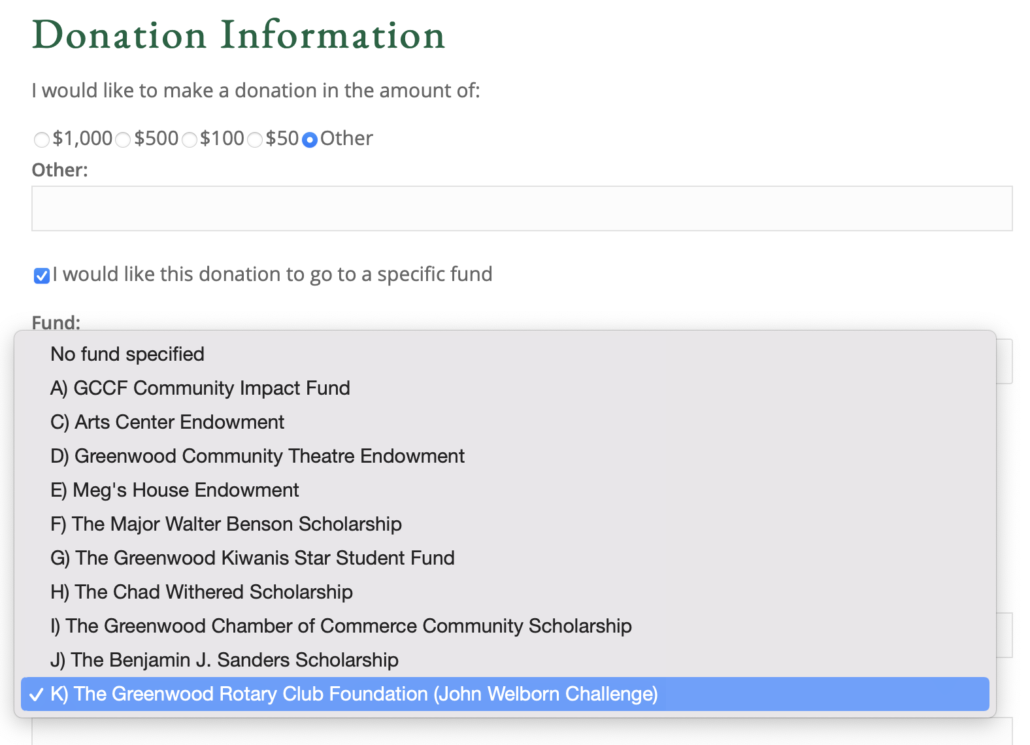 Enter an amount equal to or greater than your age.