Many members of Greenwood Women Care (GWC) and guests gathered in the Federal Building courtyard for a festive and fun reception. While enjoying the delicious spread of desserts, wraps, shrimp, fruit, olives, cheeses, and celebratory champagne, attendees fellowshipped with each other while being treated to singing and guitar playing by Byron Hilley of the Tracie & Byron Acoustic Duo. At 6:00 pm, the members and guests migrated through a side door into Greenwood Community Theatre. At the doors to the auditorium, Rhonda McGinnis and Summer Booker distributed fortune cookies made by Catherine DiBenedetto, Co-Chair of the Communications Committee, which held either a symbol, number, or uplifting message about GWC.

From the GCT stage, Mary Woodiwiss, Chair of the Advisory Board, welcomed everyone to the annual meeting, “Celebrating All Things GWC!”. She announced that there are fifteen new GWC members this year (so far!) and gave a special welcome to these new members as well as to our guests. Mary spoke about how we are looking back to 2021 with gratitude, and looking forward with hope and excitement in this, our fifth membership year. She commended the dedicated and varied work of our committees which help to “make GWC the vibrant organization that we are”.

Amy Fennell then came to the podium and gave the first of four member testimonials about why she joined GWC last year. A wife, mother of three, and music educator, Amy mentioned that when she was introduced to GWC by friends, she also received encouragement from her husband to join. She recounted that the vocal ensemble she founded and leads, Palmetto Girls Sing!, performed for GWC last May and that she was not only warmly welcomed but was also moved by the presentations at that meeting by other nonprofit leaders that she knows and admires.

Amy then drew the first two names from a fishbowl to identify winners of door prizes, handcrafted items provided by Main & Maxwell gallery and home baked items from Mary Woodiwiss. Summer Booker, Advisory Board Treasurer, delivered these and the six other prizes won by those whose names were drawn later by Andrea White, Vickie Chandler, and Sabrina Miller.

Lesley Lane of the Tech Team introduced the 2021 Annual Report video “A Year to Celebrate” with her stirring comments. This video is an inspiring visual recap that celebrates GWC’s many activities during the previous year. Such good memories were evoked of our quarterly meetings, socials, workshops, and GWC 2021 grants.

Andrea White, Executive Director of the Food Bank of Greenwood County, then shared about her involvement with GWC: “I was interested in joining this group of amazing women to help support and uplift the nonprofit community in which I love, network, and build a greater Greenwood. GWC is a special organization because the collective giving directly impacts Greenwood and advances the mission and vision of all organizational recipients.”

Next came “GWC Fun Facts” hosted by Laura Stowe and Rachel Strayer (our own Amy Poehler and Tina Fey) and our very own Vanna White, aka Catherine DiBenedetto (all from the Communications Committee). Fun Facts included how much money is currently in our endowment and that $200,074 in grants have been bestowed over the past three years via thirty grants. It was also fun to learn that you do not have to be “Old as Dirt” to join GWC, just “Older than a Kindergartener.”

Vickie Chandler then came to the stage and gave her testimonial as to why she joined GWC. Vickie was eager to support the community she has longed lived in and loved and to help introduce her daughter, Susan Albon, to a circle of community-minded women when she moved here. Vickie and Susan are Charter Members, and Vickie welcomed a new mother-daughter team this year, Terri Bacon and Carson Penney.

Next up was our 2021 Grant Number Shuffle! Casey Tompkins and Eleni Tsikalakis called seven women to the stage by the numbers or symbols found inside their fortune cookies. Each received a large card with a symbol or digit. Eleni and Casey led us through a rambunctious reordering of the women and their cards until the correct number was displayed: $78,449 awarded in 2021!

Sabrina Miller, Executive Director of the Boys & Girls Club of the Lakelands, then spoke about the place of GWC in her life and our community. Sabrina noted: “As a nonprofit leader that relies on the generosity of the community it’s a way to do for others what is being done for my organization. I believe GWC is so important because of its unique ability to allow any woman to become a philanthropist with a small annual donation, yet have that gift make a tremendous impact through the power of collective giving.”

Laura Bachinski, Vice Chair of the Advisory Board, referenced the four members who spoke and closed the meeting with a challenge to all in attendance. The challenge is to share one’s membership story with four other women and then bring them to the next GWC meeting on May 16 at the Self Regional Healthcare Cancer Center. She also thanked Greenwood Community Theatre for hosting GWC’s Annual Meeting, and all those who participated in providing this marvelous reception and program. 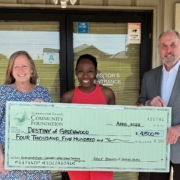 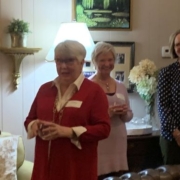 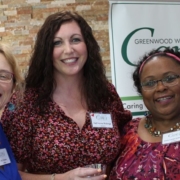 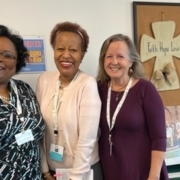 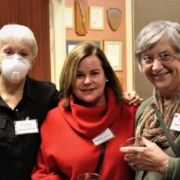 GWC BYOF Social, “Bring Your Own Friend”, at The Greenwood Building, January 18, 2022 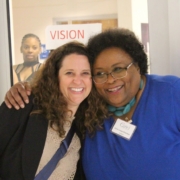 Considering a donation of appreciated stock or other intangible assets? Contact us to discuss your options today!

Contact Us
GWC Quarterly Meeting, “Going for the Gold! Academics-Arts-Athletics”,...